Almost a drop of rain for 18 months. In Hargududo, a village in the Somali region of Ethiopia, residents show AFP the dried corpses of goats, cows or donkeys, scattered not far from modest thatched huts.

In this month of April, theoretically one of the wettest of the year, the air is hot and dry and the earth dusty and sterile.

Most of the animals of about 200 semi-nomadic families in the village died: “Those who had said 300 goats before the drought only 50 to 60 remained, in some (…) none survived”, explains one of the villagers , Hussein Habil, 52 years old.

Since the end of 2020, here, as in other southern regions of the country, in neighboring Somalia or in Kenya, it has not rained much. In Ethiopia, this humanitarian disaster is on top of that caused in the north by the conflict in the Tigray region.

The United Nations Office for Humanitarian Affairs (OCHA) estimates that between 5.5 and 6.5 million people (or between 5 and 6% of the population) in Ethiopia are severely food insecure due to drought. . 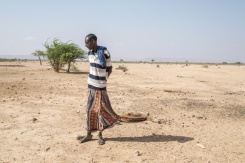 According to Ocha, the current drought has killed nearly 1.5 million head of cattle in this country, including nearly two-thirds in the Somali region, “and the physical conditions of the surviving animals have seriously deteriorated, reducing their market value. “.

For the nomadic or semi-nomadic populations of this arid and hostile region, livestock provides food and income, but it also constitutes all their savings.

“We were pure nomads before this drought: we depended on animals for meat, milk and sold them,” recalls Tarik Mohamed, 50, a farmer from Hargududo, located about fifty kilometers from Gode, the big city in the administrative district of Shabelle.

“But these days most of us’ sit down ‘,’ there is no future in herding, because there are no more herds’, he continues bitterly, ‘our nomadic life is over”. 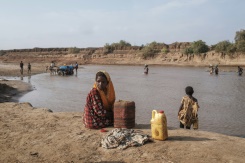 By draining wells and reducing pastures, what these Somali pastoralists describe as the “worst drought ever experienced” is wiping out livestock, the mainstay of their now threatened lifestyle.

And it is a whole society that falls apart: villages that must be left for the city, families that disintegrate, children that are neglected because it is necessary to save what remains of the animals, essential for survival. .

The alternation of dry and rainy seasons – the short one from March to April, the long one from June to August – has always marked the life of these breeders. 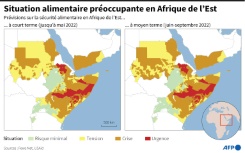 “Before this catastrophic drought, we survived the drought thanks to the remnants of pastures left by previous rains,” says Tarik Muhamad.

But none of the last three rainy seasons have been there. And the fourth, expected in March, also seems to want to give up.

In the region, “drought is a cyclical phenomenon (…) but now it is increasingly frequent,” observes Ali Nur Mohamed, 38, an official of the NGO Save the Children.

In East Africa, “the frequency of droughts has doubled since 2005, from six to three years” and “for 30 years there have been several episodes of prolonged drought, especially in the arid and semi-arid areas of the region”. writes the United Nations Intergovernmental Panel on Climate Change (IPCC) in its latest report. 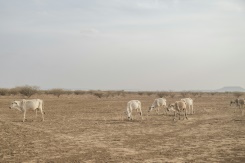 As early as 2012, a study by the American Development Aid Agency (USAID) found that the southern regions of Ethiopia received 15 to 20% less rain than in the 1970s and that the areas receiving 500 mm of rain per year required for sustainable agriculture and livestock.

“From now on, as shepherds try to recover from a drought, they are hit by a new one,” continues Ali Nur Mohamed, droughts “are so close together that these shepherds cannot recover.”

A topic that should be on the menu of the United Nations Convention to Combat Desertification (UNCCD) which meets in Abidjan from 9 to 20 May.

All the ranchers met in the region claim to have lost between 80% and 100% of their livestock. The few herds, cows or goats, crossed here and there, are very thin. Many dromedaries have lost their hump, a food supply.

To feed themselves, many shepherds have moved to the camps that displaced by drought have raised near the localities. 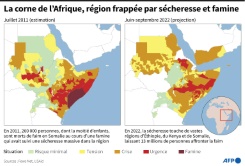 Like in Adlale, not far from Gode, where, in the morning light, the colored veils of dozens of women come to ask for emergency food aid distributed by the World Food Program (WFP). .

“All our animals died from the drought” and “we walked five days to come” here, says Habiba Hassan Khadid, 47, a mother of ten, who raises cows and camels.

A mother of seven, Ahado Jees Hussein, 45, joined Adlale carrying her disabled 15-year-old son on her back. “I had 100 goats, they all died (…) I came with nothing. I had three pack donkeys, but they all died”, says this widow who says she “has never experienced such a drought”.

Together with 2,700 other families, the two women live in the Farburo 2 camp, set up three months ago. Small branch huts support a patchwork of fabrics that provide saving shade at a temperature of around 40 ° C. 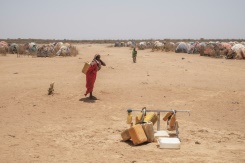 “Living conditions are alarming, most families live on what they receive from relatives” or from local residents, explains Ali Mohamed Ali, coordinator of the camp.

He too is pessimistic: “Nomadic farming cannot continue to exist with the recurrence of drought”.

“Before the drought”, Halima Harbi, a 40-year-old mother of nine, was “one of the families who lived well”, “those who had enough” to live well, in a region where luxury is unknown.

“Now we have nothing left,” he says, “I used my last donkey to transport my family here, but he (…) died on the way.”

“We didn’t bring anything – neither dishes nor kitchen utensils … – we were content to drag our children”.

In his tiny hut, Abdi Kabe Adan, a solid and proud 50-year-old shepherd, shouts without restraint: “None of our animals have been spared.”

“Before it rained in other parts of the region, so we moved with our animals to the watered pastures, even if it took several days. But this time the drought is everywhere” and “the wells are empty”. 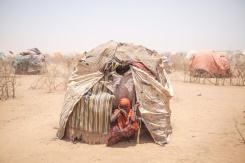 “I don’t think it’s possible for our way of life to continue. I’ve seen goats eat their droppings, camels eat other camels. I’ve never seen that in my life,” she sobbed.

There are few men in the camp. Some stayed with the last of the cattle, looking for a miraculous pasture. Many have left in search of work in the city. Others have fled, unable to deal with the shame or questions of wives worried about the future.

Because the drought has also damaged the social organization of these communities.

“Before, men had the task of milking the cows”, leading the herds to pasture, “buying food and goods for the family: these roles have disappeared with our cattle,” explains Halima Harbi.

Families are exploding and solidarity has given way to rivalries. “When the water supply trucks arrive, the old and the most vulnerable get nothing because the competition is tough,” she complains.

Children pay a high price: overwhelmed by problems, parents “don’t even have time to take care of themselves, to watch over their offspring,” explains Ali Nur Mohamed of Save The Children.

“Normally a mother takes care of her children. We understand the seriousness, the extent of the problems, which are such as to make her forget to take her child to the hospital (…) or prevent him from doing so., Because she is monopolized by other children or committed to save his cattle, ”he explains.

In particular, the NGO carries out community tours, identifies children in danger and transports them to health facilities, such as the Gode hospital.

There, in the suffocating atmosphere of the nutritional unit room, on iron beds, the mothers ventilate with their veils – which also chase away flies – a dozen very thin children.

In the region, usually, “our children are on the verge of malnutrition, so at the slightest disease they fall into malnutrition,” observes the director of the hospital, Dr. Mahamed Shafi Nur.

Most children are treated on an outpatient basis with nourishing, ready-to-eat peanut-based pastes. Those suffering from complications – about 15% – are hospitalized.

“Families are disorganized”, sometimes “the father has gone far in search of food” for the cattle, “the mother finds herself alone with many children. Consequently (the children) arrive late” to the hospital “and with complications, “explains Dr. Mahamad Abdi Omar, the plant’s pediatrician.

Samiya, the child of Rokiya Adan Mahad, 39, had been suffering from diarrhea and vomiting for a week when he finally brought her.

Falis Hassen’s son has been suffering for two months from canker sores and liver, which prevent him from breastfeeding. “We are busy looking for pasture and water for the cattle”, explains this 38-year-old woman, who came without telling her husband: “She would not have left me, there is so much to do”. 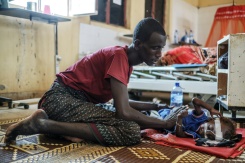 Abdullahi Gorane’s son, hair bleached from malnutrition, had been suffering from diarrhea and vomiting for weeks.

“I took care of the cattle, I didn’t have time for my son”, says this 30-year-old man – the only father present – who decided when the drought got the better of his flock: he lost two of his five camels, the 80% of its goats and 100% of its cows.

Lack of contraception and distancing between births, exclusive breastfeeding and poor sanitation explain the chronic malnutrition of children, says Ahmed Nur, a health worker at the Kelafo health center 100 km from Gode.

But the situation was very “aggravated” by the drought and “every month the number of malnourished children increases”.

Cough, edema on the body (a possible symptom of severe malnutrition): Sabirin Abdi, her two-year-old daughter, had already been sick for a month when this breeder, who improves the ordinary with few animals, decided to bring to Kelafo.

“We didn’t harvest this year,” he explains, “I had ten goats,” four died in the 11 days I was in the hospital “with Sabirin.

© 2022 AFP. All reproduction and representation rights reserved. All information reproduced in this section (dispatches, photos, logos) are protected by the intellectual property rights held by AFP. Consequently, none of this information may be reproduced, modified, redistributed, translated, commercially exploited or reused in any way without AFP’s prior written consent.