The Taliban have severely tightened restrictions on women’s freedom in Afghanistan, requiring them to wear full veils in public on Saturday, preferably the burqa, an announcement heavily criticized by feminist activists.

In a decree issued during a ceremony in Kabul, the supreme leader of the Taliban and Afghanistan, Hibatullah Akhundzada, ordered women to completely cover their bodies and faces in public, stating that the burqa, the blue veil at the eye height is the best option for that.

Women should wear “a tchadri (another name for the burqa), because it is traditional and respectful,” indicates this decree.

“Women who are neither too young nor too old should veil their faces, except their eyes, according to Sharia recommendations, to avoid any provocation when they meet a man” who is not a close member of their family, she adds.

And if they have no reason to go out, they better “stay home”.

This decree also lists the penalties to which heads of families who do not impose the use of the full veil are exposed. The first two offenses will be sanctioned with a simple warning. The third will be sentenced to three days in prison and the fourth will be brought to justice. 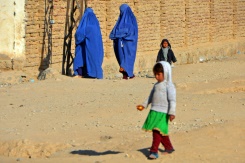 Additionally, any government employee who does not wear the full veil will be fired immediately.

“Islam has never recommended chadri,” a women’s rights activist who remained in Afghanistan, on condition of anonymity, reacted to the AFP.

“The Taliban, instead of being progressive, are going backwards. They are behaving as in their first regime, they are the same as 20 years ago,” he added.

“We are a broken nation, forced to endure assaults we cannot understand. As a people we are crushed,” tweeted Muska Dastageer, a former professor at the American University of Afghanistan, now based in Afghanistan.

Since the Taliban returned to power in mid-August, the feared ministry for the promotion of virtues and the prevention of vice had issued several recommendations on how women should dress. But this is the first edict on the matter promulgated at the national level.

The Taliban previously asked women to wear at least the hijab, a scarf that covered the head but revealed the face. But they strongly recommended wearing the burqa, which they made mandatory when they first came to power between 1996 and 2001.

Under their first regime, they had deprived women of nearly all rights, according to their ultra-strict interpretation of Sharia law, Islamic law. 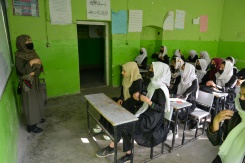 Agents of the Ministry for the Promotion of Virtue and the Prevention of Vice whipped anyone caught without a burqa.

After their return to power, after 20 years of occupation by the United States and its allies, which had ousted them in 2001, the Taliban had promised to be more flexible this time around.

But they soon reneged on their promises, constantly eroding rights again and wiping out 20 years of women’s freedom.

Women are now largely barred from government jobs and prohibited from traveling overseas or long distances within the country unless accompanied by a male family member.

In March, the Taliban brought high schools and colleges closer to girls, hours after their long-announced reopening. This unexpected turnaround, which was not justified except to say that the education of girls must be done according to sharia law, has scandalized the international community.

The Taliban also imposed the separation of women and men in Kabul’s public parks, with designated visiting days for each gender.

The decree issued on Saturday could further complicate the Taliban’s request for international recognition, which the international community has directly linked to respect for women’s rights. 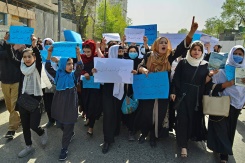 “This is an unexpected step back, which will not help the Taliban gain international recognition. Such moves will only intensify the opposition,” Pakistani analyst Imtiaz Gul told AFP.

Over the past two decades, Afghan women have gained new freedoms, either by returning to school or applying for jobs in all sectors of activity, even as the country has remained socially conservative.

Women tried to assert their rights by demonstrating for the first time in Kabul and major cities after the Taliban returned to power.

But they fiercely repressed the movement, arresting many activists and holding some, sometimes for several weeks.

The burqa is a traditional Afghan piece of clothing, widely worn in the more remote and conservative parts of the country. Even before the Taliban returned to power, the vast majority of Afghan women were veiled, if only with a loose veil.

© 2022 AFP. All reproduction and representation rights reserved. All information reproduced in this section (dispatches, photos, logos) are protected by the intellectual property rights held by AFP. Consequently, none of this information may be reproduced, modified, redistributed, translated, commercially exploited or reused in any way without AFP’s prior written consent.