The Russian invasion of Ukraine on February 24 has already had many economic consequences. Among these: the sharp drop in the stock market prices of the main French banks in the face of the risk of losses linked to a high exposure to Russia. What is it really?

French banking groups have been bothering the stock market

After the Russian invasion of Ukraine on Thursday 24 February, major equity markets suffered losses. Over the past ten days, the CAC 40 index, the main index of the Paris Stock Exchange, has lost more than 6%. At the same time, the three banking groups included in the composition of the CAC 40 index saw their shares drop by more than 15%: Crédit Agricole (-17.8%), BNP Paribas (-19.3%) and Société Générale (-28%).

The main French banks therefore suffered more than the market: the CAC 40 index reflects the general trend. This is due in particular to the surrounding uncertainty the exposure of French banks to Russia and configuring strong economic sanctions from the western world. These could in particular cause late payments by Russian economic agents and thus losses for French institutions.

French banks among the most exposed to Russia

At any time of crisis, whether of an economic, financial or political nature, the resilience of banking institutions is carefully examined. Banks, in fact, are not companies like any other. The complexity of the financial transactions carried out and the opacity of the banking activity also make it difficult to estimate the risks of losses linked to the crisis.

It is however possible to have a preview of the exhibition direct of all French banks in Russia. The Bank for International Settlements (BIS) publishes bank lending statistics by nationality. It therefore appears that French banks are among the most exposed : in the third quarter of 2021 (latest data available) they had loans to Russian borrowers for a total amount of 25.2 billion dollars. Although French institutions have halved the amount of loans granted to Russian players since the annexation of Crimea in 2014, they remain among the largest creditors behind Italian banks and ahead of Austria, the United States and Japan. 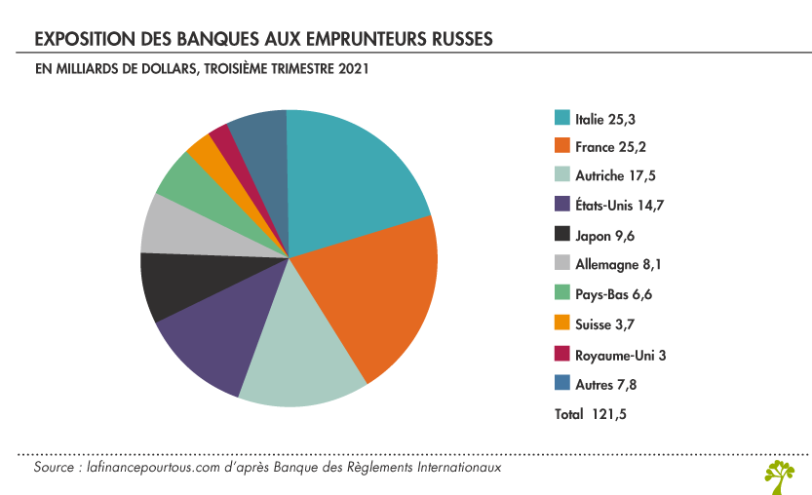 These loans therefore represent a slightly lower amount than the profits recorded by the three main French banks in 2021 (24 billion euros in total). The consequences of the conflict between Ukraine and Russia therefore do not presently present any systemic risk for French banking institutions. However, we should be cautious, insofar as the BIS statistics do not tell us about the indirect exposure of banking institutions.

The specific case of the Société Générale

Société Générale is currently the French bank most affected by the consequences of the war in Ukraine. This can be explained in particular by the bank’s significant presence in Russia, through its subsidiary Rosbank. This Russian bank is 100% owned by Société Générale. With 5 million individuals and approximately 87,000 corporate clients, Rosbank was valued at the end of 2021 at 3.2 billion euros. This is roughly the amount of loss that Société Générale could suffer at worst. If the amount remains significant, such a loss should not, however, endanger the group whose profits reached € 5.6 billion in 2021.