Michael Alan Stollery, CEO of blockchain firm Titanium Blockchain Infrastructure Services (TBIS), pleaded guilty to securities fraud for a $ 21 million cryptocurrency scam. The Californian admitted that he falsified information on the BAR coin, a crowdfunding token that should have been registered with the US Securities and Exchange Commission, but he was not. He faces 20 years in prison. 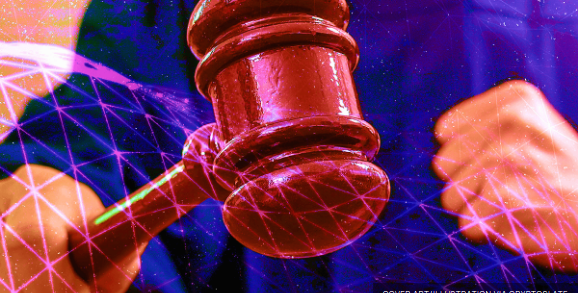 Michael Alan Stollery, 54, defrauded investors by raising funds for Titanium Blockchain Infrastructure Services, an alleged cryptocurrency investment platform he founded. Stollery faces up to 20 years in prison. The CEO behind an initial cryptocurrency fraudulent offer pleaded guilty in the U.S. Federal Court of securities fraud in a scheme in which $ 21 million was stolen.

The TBIS scam was one of many initial dubious coin offerings, or ICOs, in the late 2010s. According to the complaint, between 2017 and 2018, Stollery introduced TBIS as a new company and praised its currency with a series of elaborate misrepresentations. Stollery’s initial coin offering (the cryptocurrency equivalent of an initial public offering on the stock exchange) was allegedly aimed at raising funds to build TBIS services such as network infrastructure. Stollery, also called “Michael Stollaire,” instead spent about $ 50,000 of investor money to pay off credit card debt and used the extra money to pay bills related to his apartment in Hawa.

The stolen funds consisted of digital assets, such as Ether and Bitcoin, and money from dozens of investors in at least 18 states and overseas who bought the TBIS token called “BAR,” federal prosecutors wrote in a criminal complaint filed with the United States. beginning of this year. Stollery conducted and publicized the ICO between November 2017 and May 2018.

Stollery also did not register the ICO with the Securities and Exchange Commission. All ICOs and cryptocurrency investment opportunities that qualify as securities or investment vehicles must be registered with the SEC. The agency obtained a federal court order in May 2018 ending the ICO and freezing the assets of Stollery and TBIS.

The agency told the court that Stollery lied about his company in its marketing materials and in the white paper accompanying the ICO, touting slogans like “Company as a Service” and “Mining as a Service”. Just as steel changed the construction industry forever, Titanium will usher in a new era of networking, powered by blockchain technology. His promotional campaign included self-produced YouTube videos, paid interviews, online Facebook ads, and “prolific tweets,” Stollery said on social media, which he used frequently, the 2018 SEC complaint shows.

“This ICO was based on a social media marketing blitz that would mislead investors with purely fictitious claims about business prospects,” said Robert A. Cohen, then head of Cyber’s Cyber ​​Unit. Enforcement Division of the SEC.

To add the appearance of legitimacy, Stollery placed false customer testimonials on the TBIS website, falsely claiming to have business relationships with the Federal Reserve and dozens of major corporations, including Apple, Boeing, eBay, General Electric, Microsoft, PayPal, Pfizer, Royal Bank of Scotland, Universal Studios and Walt Disney. The TBIS website is currently displaying a court notification regarding the allegations against Stollery, and TBIS’s social media accounts appear to have been removed.

Stollery’s ruling marks the latest in a series of moves by the U.S. Department of Justice to curb cryptocurrency fraud. The DOJ’s Cryptocurrency Fraud Unit claims to have indicted cases since 2019 involving over $ 2 billion in stolen investor money.

Each conviction sends a message to cryptocurrency scammers and scammers that law enforcement has the tools to tackle Web3’s criminal activity, says William Callahan, director of government and strategic affairs at Blockchain Intelligence Group. . Justice has come a long way, he says. When I oversaw anti-drug efforts in the Midwest as a special agent in charge of the St. Louis division of the Drug Enforcement Administration between 2018 and 2020, we had one or two investigators or analysts who were familiar with cryptocurrency and blockchain financial investigations. Now, these offices across the country have teams dedicated to identifying and stopping cybercriminals, says Callahan Information Security Media Group.

The flurry of recent law enforcement actions taken by the Justice Department does not imply an increase in cryptocurrency-related attacks, says Ari Redbord, head of legal and government affairs at blockchain intelligence firm TRM Labs.

While it may seem like there is a wave of scams and fraud going on right now, what we are actually seeing are successful lawsuits that have been going on for some time. Most of these are not new cases, but rather the result of actions the department has taken since the creation of the DOJ Enforcement Framework nearly two years ago, he said. In October 2020, the Department of Justice released this framework as part of an effort to define its approach to cryptocurrencies. In 2021, the ministry also created the National Cryptocurrency Enforcement Team.

Web3 is unlikely to replace Web2 by 2030, the Gartner report says