If you are interested in blockchain technology, you will know that it has the potential to generate productivity gains in multiple sectors, be it the financial markets, the energy market, supply chains, or even companies involved in the metaverse. You know, this virtual world that we don’t know the details of yet and whose CEO is Half, Mark Zuckerberg, praises him. Let’s go back to our revolutionary technology. Between the promise of disintermediation, improving transaction transparency, and reducing transaction costs, among others, blockchain adoption has crossed the borders of developed countries. A look at the countries that have the largest number of cryptocurrency holders, and therefore by implication, the largest number of users of the technology described above.

Share of respondents who indicated they own or use cryptocurrencies in 23 countries around the world from 2019 to 2021.
Source: Statista

Nigeria is way ahead in terms of cryptocurrency users with 42% of respondents claiming to hold digital assets. In second place we find Thailand with 31% and in third place the Philippines with 28%. I know what you are saying to yourself: “What about France?”. It ranks 57th in the ranking with an adoption equal to 8% of the interviewees while maintaining the above-mentioned methodology.

As we can see from the previous chart, cryptocurrencies are particularly popular in emerging markets such as APAC (Asia-Pacific), Africa and Latin America. According to a study by Toluna (company that produces market research), 75% of investors in emerging countries plan to increase their investment allocations in cryptocurrencies, compared to 57% in developed markets.

The study also notes that:

“- 32% of consumers in emerging markets say they have faith in cryptocurrency, compared to only 14% in developed markets

– 41% of consumers in emerging markets say they have invested in cryptocurrency, compared to 22% in developed markets “

So what drives the population of emerging countries more than developed countries to launch into the crypto-blockchain ecosystem?

According to the report by The World Bank entitled the “Remittance flows show robust growth of 7.3% in 2021“Remittances to low-income countries reached over $ 580 billion (+ 7.3% compared to 2020) in 2021. Overall, these remittances serve as a lifeline for supporting developing countries household spending on their basic needs such as food, health but also on education. For example, these flows increased by 21.6% in Latin America and 9.7% in the Middle East and North Africa. Remittances should continue to grow by 2.6% in 2022 in line with global macroeconomic forecasts.

The cost of sending $ 200 across international borders is always very high. It represents on average 6.4% of the transferred amount according to the World Bank’s remittance price database. In this context, it is understandable why a large part of the population of emerging (low-income) countries is turning to blockchain solutions. For example, using the Bitcoin network we can send value anywhere in the world for less than $ 2 at the time of writing.

Depending on the number of users and transactions over a given period, fees can skyrocket and delivery times can increase. On the other hand, Bitcoin is a formidable alternative to the current banking system from a financial point of view. And the most skilled could use other blockchain networks to send value, such as the Solana network or that of Binance for example, in order to optimize transaction costs. You will say to me, “Yes, but don’t these countries have to have very developed Internet coverage?” A look at the number of Internet users in the world. 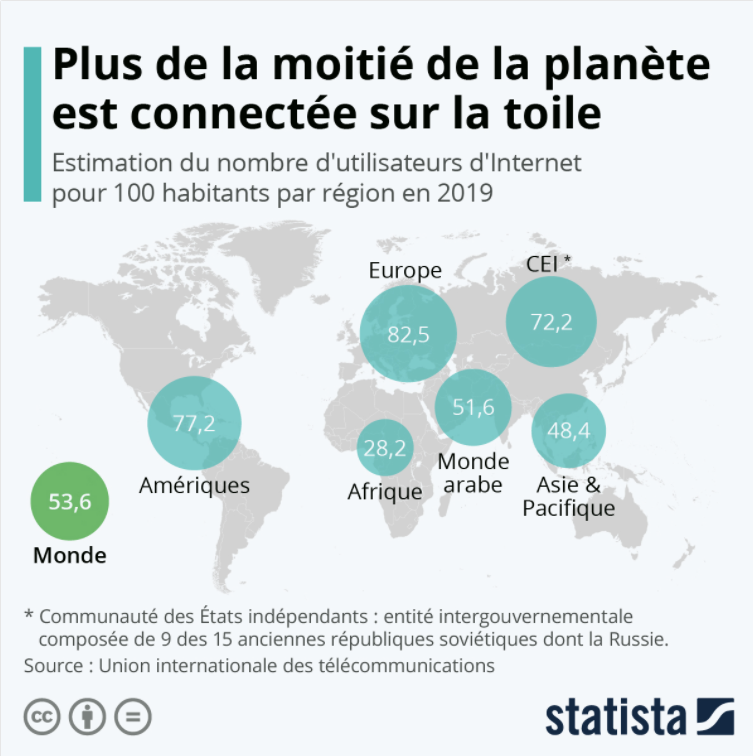 Number of Internet users per 100 inhabitants in 2019.
Source: Statista

The data is relatively difficult to estimate in some regions of the globe when it comes to internet coverage. But for example, in 2011 the coverage rate was 11% in Africa and now stands at 28% in 2019. We are not taking much risk in saying that this percentage will increase in the coming years. A factor that will be conducive to greater adoption of crypto-blockchain services.

While cost reduction is a significant benefit to the populations of these countries, financial inclusion is just as important.

Also according to the World Bank, more than two billion people (25%) in the world are without a bank account. As you can imagine, even there, most of these people are in emerging countries. With various crypto services such as BitPesa in Africa, OkCoin in China, OkLink in India or Coin.ph in the Philippines, hundreds of millions of people have access to financial services via cryptocurrencies. These companies provide their services directly via mobile apps and allow users to source and trade cryptocurrencies around the world. In these countries, having a computer is on the sidelines, but owning a telephone is on the rise. 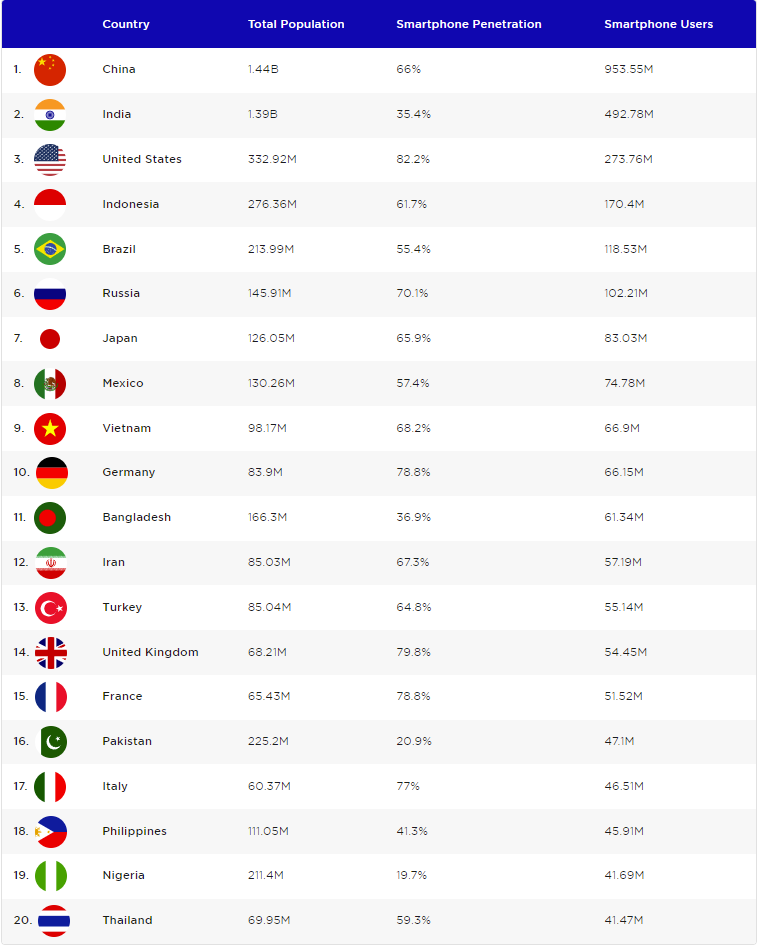 In 2020, Nigeria had more than 40 million people who owned smartphones, which is 20% of the total population. For its part, the smartphone market in Thailand has a penetration rate of 60% and in the Philippines of 41%. For these smartphone owners, the alternative of cryptocurrencies to the exchange of value is not negligible. These users mainly adopt platforms Peer to peer (P2P) to trade cryptocurrencies instead of traditional centralized platforms.

To exchange value, emerging countries are turning more to platforms Peer-to-Peer (P2P)). An explanation seems to me necessary to explain how P2P exchanges work.

You are most likely familiar with platforms like Binance or Coinbase for obtaining cryptocurrencies. Trade is done through an order book in order to bring buyers and sellers together on a digital asset trading market. In this system, neither the buyer nor the seller has any idea who the other party is, which provides some form of anonymity.

Bitcoin was originally created to allow transactions peer to peer. Furthermore, the document issued by the mysterious creator of the digital currency, Satoshi Nakamoto, had titled his document: Bitcoin A peer-to-peer electronic cash system

For example, when you buy bitcoin from someone on Binance, it is unlikely to come from your neighbor because on this platform all the players are together through the order book. If you want to buy bitcoins from your neighbor, you can initiate a peer-to-peer transfer to make sure you are trading with him. This time you will be negotiating directly with him. A system that reduces transaction costs to almost 0.

Now that we understand the difference between the two trading models a little better, let’s go back to our emerging countries. We note that in the graph above, most of the P2P volumes are made by the regions where the emerging countries are located. This data reflects the ease of exchange of values ​​between individuals via blockchains and cryptocurrencies. It is probably easier to send and receive value via cryptographic P2P applications than via an expensive banking system offered by some countries.

We conclude with one of the major problems facing developing countries. Countries where the concentration of wealth is in the hands of a very small percentage of the population and where over 70% of the population survives below the poverty line. Embezzlement and corruption are omnipresent, particularly in Africa.

State of corruption in the world
Source: Statista

The countries most prone to corruption are mainly emerging markets. State officials manage the funds allocated to the country with an iron fist without the slightest transparency in spite of the population. We could easily imagine that the use of blockchain and digital currencies, in particular smart contracts (to better understand these smart contracts: Episode 7: Web 3.0, is the smart contract a reality or a digital utopia?), could promote the transparency of transactions within these countries. Records on a public blockchain accessible to all citizens would allow for transparent tracking of how funds are allocated. Solutions that will be favorable to the population but perhaps, and also very certainly, that will be more restrictive for the leaders of these countries with dark intentions.

Here we have made an inventory of the crypto-blockchain environment in emerging countries. While we have seen many positives about adopting these solutions, questions remain about scalability, interoperability, security, transition costs, data privacy, and blockchain governance. Business leaders and policy makers will have to think long and hard about when and under what conditions a blockchain initiative can be justified. Country-specific issues that cannot be generalized to all emerging countries. Count on me to present a focus on blockchain solutions and their impact in each region. To be found very quickly in the columns of Zonebourse