Still little understood by the vast majority of us, non-fungible tokens (NFTs) have nevertheless been adopted by a myriad of public companies who see it, perhaps, as an opportunity to be pioneers, visionaries and innovators in the Web3. Or simply to navigate trendy hyper-speculation.

To put it simply and briefly, an NFT (Non-fungible token), is literally: a non-fungible token, in other words, not all NFTs are created equal. They are not interchangeable and, like all works of art, they are not the same. Each NFT is different because it is unique. Furthermore, they are based on the blockchain and therefore benefit from the unique features offered by this technology, namely traceability and its tamper-proof appearance.

Only you, the owner, can trade or sell NFTs on the blockchain. Anyone online can share a photo of a famous painting, it doesn’t mean they own it. The signature helps prove that you are the sole owner and, again, thanks to the blockchain, everyone can see that the NFT belongs to you. For example: a replica of the famous Mona Lisa painting is not very valuable. What makes the painting precious is in fact the consensus around the signature of Leonardo Da Vinci. Now it is “easy” to copy the painting itself, but it is impossible to falsify its origin. Now that we understand the concept of NFT a little better, let’s go back to the NFTiff collection.

On August 5, the LVMH entity promised to turn NFTs into wearable jewelry. In other words, transforming something that initially wants to be digital into something physical, authentic and real.

We are taking NFTs to the next level. Exclusively for CryptoPunks owners, NFTiff transforms your NFT into a bespoke pendant handcrafted by Tiffany & Co artisans. You will also receive an additional NFT version of the pendant. More information: https://t.co/FJwCAxw8TN #NFTiff #TiffanyAndCo pic.twitter.com/pyKlWejHv4

Knowing this, a few hours after learning the aforementioned information, I hurried to inspect this ambitious collection:

What was my disappointment when I saw this good old “SOLD OUT” (“sold out”) on the official Tiffany & Co. website. But soon, I realized I had no chance of getting one of those famous charms. They were expressly reserved for owners of NFT CryptoPunk, or owners of a digital monstrosity, which is worth, at the time of writing this article, an average of 200,000 euros per unit.

For example, Alexandre Arnault, executive vice president of Tiffany & Co and son of Bernard Arnault, posted on Twitter his pendant matching the CryptoPunk # 3167 that he owns and proudly wears as his profile photo. .

If Alexandre Arnault was able to preview his pendant, the lucky NFT buyers who paid 30 ETH will be able to turn it into tangible jewelry only from 2023 according to a press release of society. The owners will also keep a standalone custom NFT on the Ethereum blockchain.

Note that if the collection is marketed by the company across the Atlantic, it is administered by chaina blockchain tech startup that creates cryptographic ledgers and cloud infrastructures to support transformative financial products and web applications3.

Were the NFTs kept or resold? Towards the Ethereum network.

For now, the NFTs that allow you to get the pendant only in 2023 are mostly held and not resold on the secondary market. 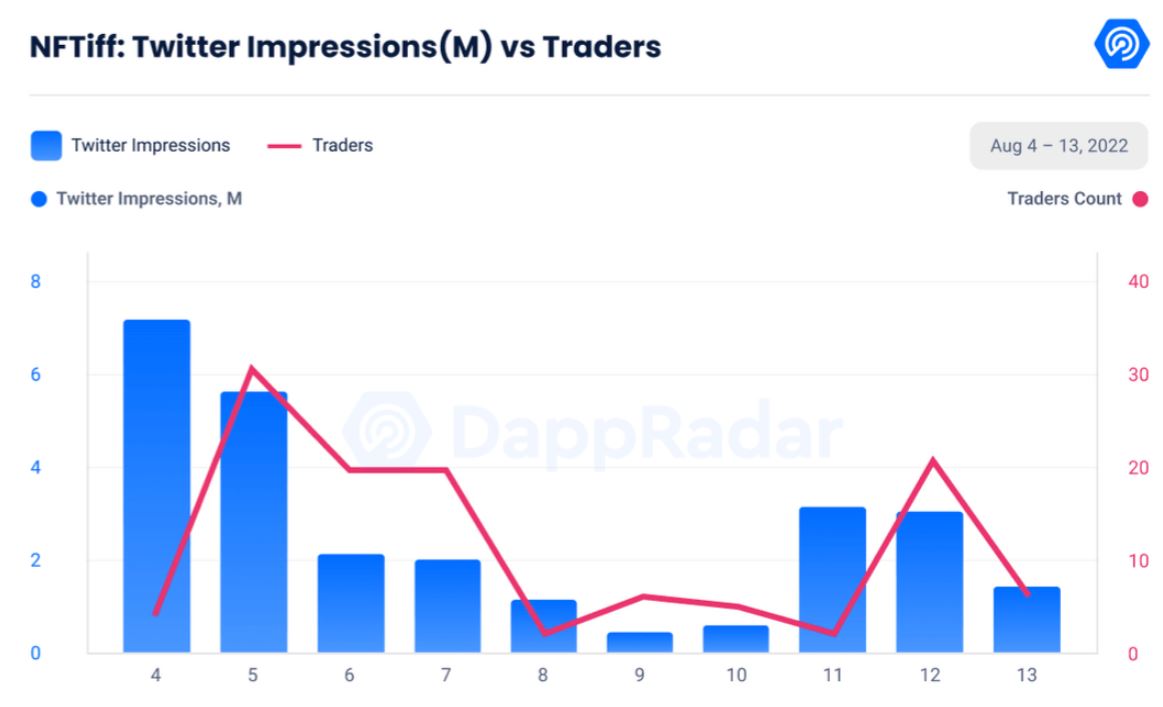 The NFTiff collection had 100 independent traders in the first week following the sale, which is the lowest ever for a collection according to data provider DappRadar. However, this collection is very exclusive and has a strong focus on the community that holds the NFT for future benefits. Consequently, holders choose not to sell their NFT for a short-term profit. Also note that, If an NFTiff holder sells their NFT on the secondary market before the pendant is shipped, in 2023, they are ineligible to receive the pendant. This obviously explains this conservation as well.

Current financial metrics suggest that the market places a high value on funding given the reliability of the underlying company. On the first day of the launch, the trading volume reached $ 1 million, decreasing in the following days by almost 90%. While the trading volume has decreased significantly, the average sale value is stable and currently stands at 24.4 ETH ($ 45,990), down 8% from the sale price on the day of launch. 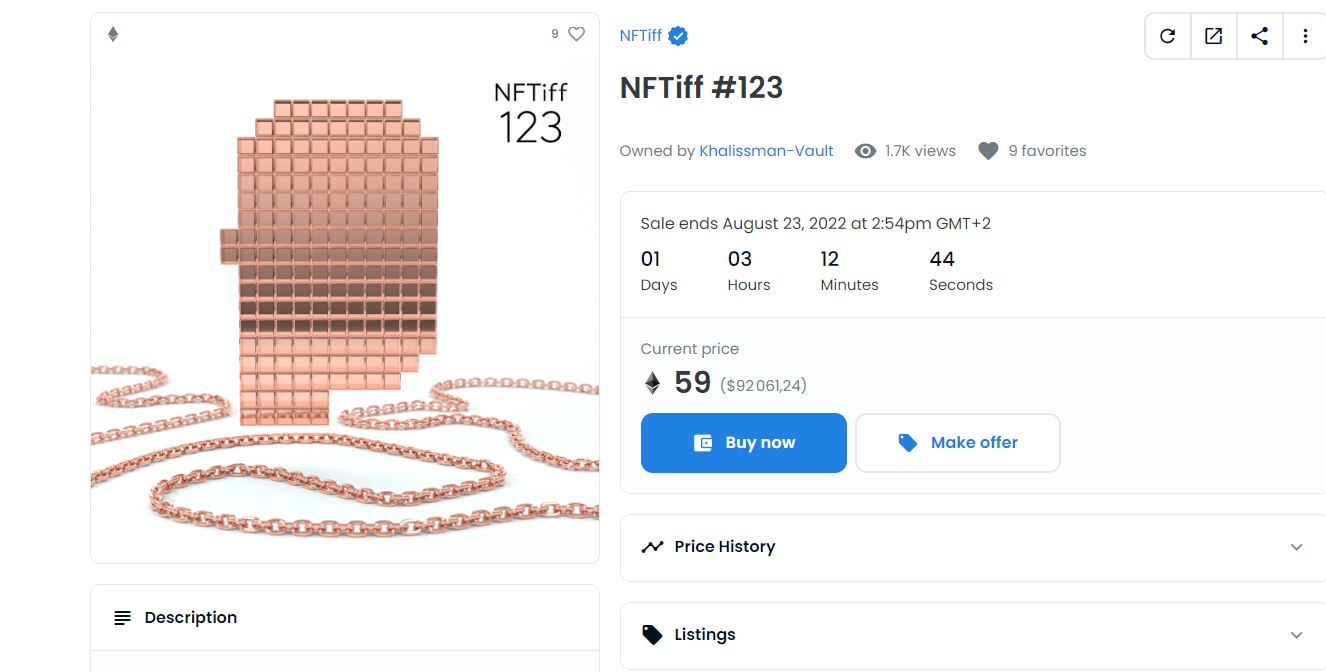 Between conservation and concentration

The NFTiff collection currently has a unique owner ratio of 71%, indicating that this is a very high distributed collection. The more unique owners, the lower the risk of collusion between owners. The concentration of whales is 8.8%, the highest ever analyzed on DappRadar. there are 3 important whales:

These 3 addresses hold 8.8% of the NFTiff supply in circulation. Commonly, a higher concentration of whales suggests an increased risk of price manipulation by the holders of the collection. A greater concentration of large holders also increases the risk of large sales in the event of liquidation of their holdings. The liquidation of these whales it often causes a chain reaction that also forces many small holders to sell.

Ultimately, the luxury fashion industry has embraced NFTs faster and more passionately than other industries, and Web3 is likely to play a big role in its future. And that makes a lot of sense. Haute couture and NFTs operate on notions of exclusivity and rarity, which can help explain the industry’s openness to the Web3 compared to other companies in more industrial sectors that are just starting to experiment. One could imagine that Web2 would allow the “copy / paste” of online content, Web3, with NFT, will allow the “cut / paste” of content. An essential nuance to guarantee the non-fungibility of data, information and assets, especially in a sector such as that of luxury.

For LVMH, and its entity Tiffany & Co, this NFT collection was a resounding success. This allows him to familiarize himself with the problems and processes related to the commercialization of these non-fungible assets. Although commercialization is a first step, the sale of the pendants to NFT holders will come later in 2023. It will be interesting to see how NFTiffs will be used in both the secondary market and potential metaverses. This collection paves the way for Tiffany & Co to market its products in a new age of the Internet, in which it is hoped that the user can have more influence in controlling their data, information and resources.

Race results, with the sale of this collection, Tiffany & Co will have generated $ 12.5 million, behind Nike which leads the way with $ 185 million generated with NFT, and Gucci between the two, with $ 25 million. dollars generated. Below is the ranking of the companies that generated the highest revenues with NFT collections. (Click on the image below to enlarge it).