So-called “figital” jewelry seems to be the next big thing for NFT enthusiasts. A jewelry collection will be auctioned in an upcoming sale led by Sotheby’s. This includes a ring that can be worn both in the metaverse and in real life. The ring will be offered alongside works by big names such as Picasso and Salvador Dalí.

The sale of Art as Jewelery as Art will take place in September. The phygital ring (which connects physical reality to the metaverse) is a creation of Francine Ballard of Metagolden. An NFT ring and the real ring will be offered during the auction.

#NFT enthusiasts are looking for the next big thing in phygital sparkling items. An upcoming auction, hosted by # Sotheby’ss, is selling a collection that includes a ring that can be worn in both #metaverso and in real life. #cryptocurrency pic.twitter.com/xcJHVj69Q1

There are many new investment opportunities. And for non-fungible token (NFT) enthusiasts, owning a physical and digital item at the same time can be more interesting than just owning an NFT. Ballard explained:

“For consumers under 30, digital assets have become as important as physical assets. The luxury sector is now realizing this. And this is where our brand is located. “

No target price has yet been released for the ring, dubbed the Ethereum Expedition. The work is made with emeralds and 18-karat gold. The buyer will own the jewelry both in the metaverse and in the physical world. However, the buyer can later sell the NFT or physical ring as separate pieces.

The Ethereum ring looks like a miniature geodesic dome. According to the creator, the piece “(…) is inspired by intercontinental rocket launches, which generally last more than sixteen hours”. However, the time needed for this “(…) has been reduced to about thirty minutes by space programs like Elon Musk’s SpaceX”.

Metagolden is a platform that sells NFT-related jewelry. The company’s goal is “(…) to connect people to a new shopping experience in which the classification is defined by rarity and uniqueness”. Furthermore, “(…) the value should be determined by the return on investment”.

Metagolden’s mission is “(…) to demystify the Web3 and make the intangible tangible, transforming consumers into investors. “

Metagolden already sells NFT related Metaverse trinkets. For example, the company has its own shop in Decentraland. You can also purchase the company’s merchandise at the ARTCADE @Fred Segal store and the CashLabs Gallery Crypto Valley. In addition, there are also some gems up for auction on OpenSea. 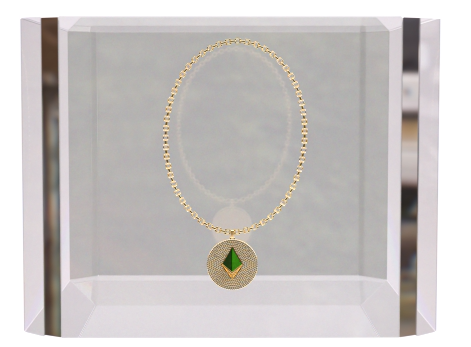 Since collecting attractive items can be a path to financial freedom, investing in phygital jewelry might be worth it. The auction at Sotheby’s runs from 24 September 2022 to 4 October 2022.