As every year Entraid, with the support of the Fncuma AgroEcoTech service, provides an update on the banking commitments of the Cumae, to be read in our monthly edition of September. The examination of the accounts between 2011 and 2021 gives an accurate picture of the loans granted to the Cuma according to banks, regions and materials.

“Stability” is the word that characterizes the situation of the Cumae from the point of view of banking commitments. Because if in 2021 the volume of loans in 3 years attributed to the Cuma will decrease slightly, with 236 M € against 257 in 2020, the perimeter of activity of the main banks involved in this market has not changed. Neither the conditions of the loans, with rates in 2021 still very slightly lower than the previous year. Nor the average amount of cumulative loans in 2021, which amounts to 32,000 euros. This is € 1,000 less than in 2020, when it was € 33,000. But in 10 years, he notes that it has evolved by 42%. The constant increase in the price of materials is no stranger to this trend.

Crédit Agricole, Crédit Mutuel and Banques Populaires at the top of cuma loans

On the podium, the order of arrival of the banks does not vary. Nor in the number of loans. Nor in the amount borrowed. The top three banks alone take 90.5% of the total amount borrowed. And 92.5% of the number of loans. Crédit Agricole, very present in agriculture, also clearly dominates the Cuma market. Its market shares are eroding little. Crédit Mutuel is in second place. And the Banque Populaire group is third on the highest podium. All the other banks with which the Cuma cooperates each represent less than 1% of the amounts borrowed. 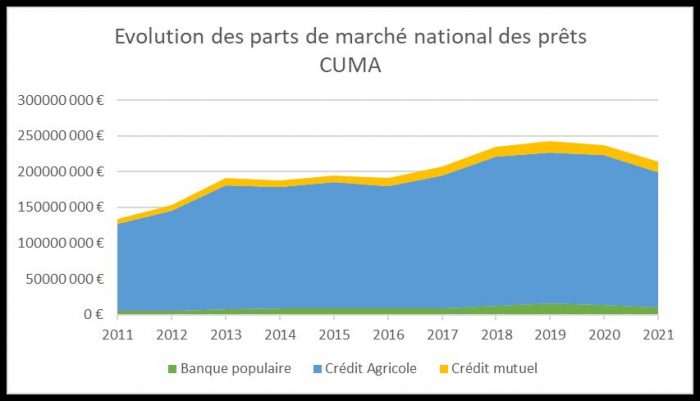 However, these figures correspond to national observations, all banks together and all regions together. However, on closer inspection, the conditions for lending in the regions differ considerably within the same bank. Each regional mutual society has a certain margin of maneuver in this area. There are also some disparities in loan terms depending on the type of equipment.

Generally speaking, the financing of tractors is the subject of slightly more advantageous loans: 0.4% less than for sowing, treatment or handling means of transport. Finally, the last point worth noting is the duration of the loans. Those contracted in 5 years represent 25% of the loans. It is above all the 7-year loans that dominate. They represent 53% of the loans.

The picture of Cuma loans, taken from 2022 data, will be different. Indeed, after a long period of calm, interest rates are rising. A phenomenon that should fuel a little more the overall increase in the cost of materials.