do you like to write? do you want your texts to be published in this section? Contact us

Moving from a deflationary era to an inflationary environment, banks have recovered in the equity market from the lows of March-April 2020. However, this remains relative across continents. Because in Europe, BNP Paribas, ING Group, HSBC and others are struggling to restore their image from the bursting of the subprime bubble. While in the United States, apart from Wells Fargo and Bank of America, the big giants are recording all-time highs.

Only now, inflationary fears amplified by the Russia-Ukraine geopolitical crisis have stopped their bullish momentum. As a result, European and American banks are under pressure. Most of them are trading below pre-Covid levels. But on the other hand, their attractive valuations with enhanced equity levels would remain investment friendly to hedge against inflation.

That’s what I’ll try to explain to you. History of whether investing in banks would represent a good alternative with commodities and properties listed in this new economic and monetary paradigm. Otherwise it would turn out to be a bad idea.

We are often told that raising interest rates benefits banks. They earn on loans charged at higher interest rates than they pay their customers. If the Fed raises the Fed Funds (or key rates), that’s fine for JP Morgan, Wells Fargo, Bank of America, and Uncle Sam’s regional banks, but it works in a healthy business environment as long as interest rates gradually increase.

Because when interest rates gallop at high speed as is the case this year 2022, banks see their borrowing costs increase faster than their loan margins. On the other hand, they must be alert to credit risk if households and businesses have taken out variable rate loans.

If we remain in an environment of high rates with the specter of sustained inflation, even banks that have favored fixed interest should refinance at the prevailing high rates. And in fact, this would deteriorate their balance sheet of assets primarily exposed to bonds.

In short, investing in banks to take advantage of a rising interest rate cycle requires a fair balance that remains fragile in the current era. Hence the importance of monitoring the gap between key rates and inflation. It is clear that we are far from it in both North America and Europe as of this writing.

Mixed fortunes in the 1970s

During the ’70s characterized by stagflation that mixed low growth and high inflation, finance had done well at that time with energy and REITs (or listed real estate). Except, looking between the lines, fortunes have mixed with traditional banks. And if I refer to the two graphs below, it was better to invest in insurance companies (Aflac) and regional banks (US Bancorp). 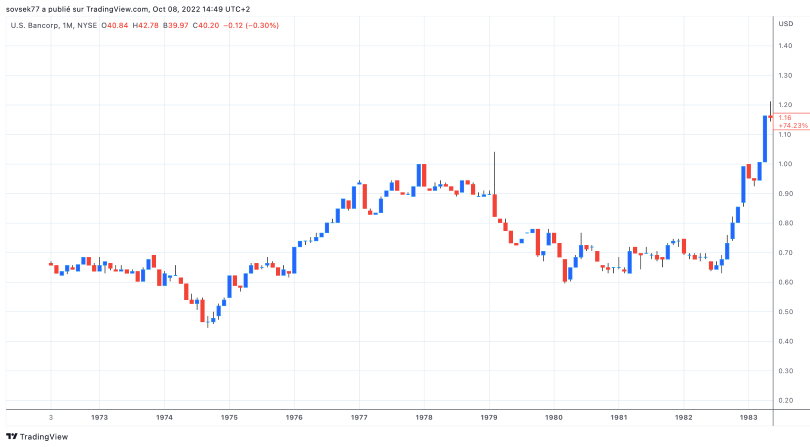 Conversely, the investment in JP Morgan or Bank of America during this period was unsuccessful. It wasn’t until the 1980s that investors regained their initial stake. 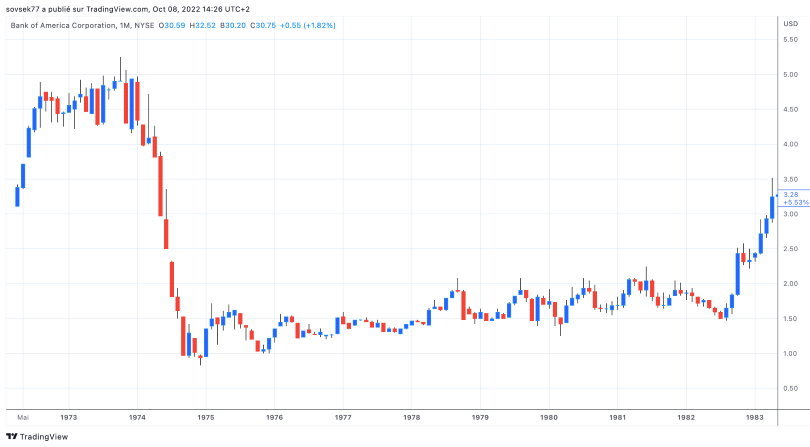 You wonder why such a divergence in performance between the different subsectors of finance. In fact, this is explained by the slippage of inflation in the United States in 1974-1975 and 1979-1981. High inflation can negatively affect the value of assets held by banks if the Fed sees it as a threat. While financial services benefit from some pricing power to preserve their margins on basic necessities like home, health and auto insurance.

In this sense, it is not for finance to perform well in times of inflation that you need to rush headlong into any sector value. The proof is that banks and even insurance companies are currently suffering in 2022. All the more so as they are struggling to absorb the brutal impact of the rate hike. And for good reason, it affects their stock market performance.

What you need to remember

Investing in banks requires perfect alignment of the planets to be a good investment idea. Not only, it would be worth it if rates rose in crescendo. But on condition sine qua non that on the other hand, inflation would be manageable. Unfortunately, the opposite is currently happening, so we are seeing the fastest rate hike cycle in history since the early 1980s. And based on that observation, the question we should be asking in the near future would not be when to buy back the banks, but rather. on their exposure to bonds and interest rate derivatives.

The least we can say is that their Core Tier 1 reports, which many financial market experts say are solid on both sides of the Atlantic, could be in trouble. Indeed, bonds regarded as risk-free assets would risk losing this reputation built up over several decades. Especially since banks hold most of it on their balance sheets.

Thereby, their profitability would deteriorate more than we would have thought if bond rates had risen to levels since the mid-2000s in addition to inflation which could be a source of anxiety. This would not help heavily indebted private and public sector affairs. With a cost of capital that would become more onerous in a recessionary environment, we should expect a contraction in the volume of loans granted. Not to mention that a stall in the bear market in equity indices would mean fewer fees at stake. This would constitute a double penalty for universal banks, in particular for BNP Paribas, Société Générale and Crédit Agricole.

In conclusion, if you want my opinion, it is unthinkable that I keep them in my wallets despite their supposedly attractive return. The reality that banks have only shifted the subprime problem to create others. In your place I would prefer to stay on the sidelines and take refuge in highly visible sectors such as defensive consumption and healthcare. But if you want to have banking stock, do it from a tactical angle and not a Buy & Hold projection.